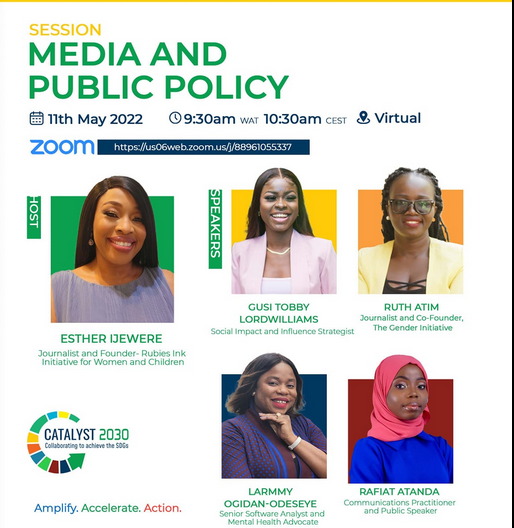 Members of the growing and influential movement of social entrepreneurs and innovators, Catalyst 2030, will converge with world leaders during Catalysing Change Week 2022, in answer to the universal call to find bold new strategies to make the world a more sustainable and fairer place for everyone.

Launched at the World Economic Forum in January 2020, Catalyst 2030 comprises more than 1,500 people and organisations who are active in over 180 countries and who directly reach an estimated two billion people

For five days, from May 9 to 13, millions of people across the world will converge at Catalyst 2030’s Catalysing Change Week (CCW).

CCW2022 offers the unique opportunity to engage with the world’s most innovative change makers as they collaborate, co-create and share best practices.

A statement by the organizers noted that the week-long event is opened to everyone who is interested in learning about the growing Catalyst 2030 movement, its work and successes in tackling the root of some of the world’s most difficult challenges, as it seeks to accelerate attainment of the Sustainable Development Goals (SDGs) by 2030.

Journalist and Founder of Rubies Ink Initiative, Esther Ijewere, will be hosting the virtual zoom session on Media and Public Policy session on May 11, to kicks off by 9.30am WAT, and 10.30 CEST.

“With over 250 sessions and activities between May 9 and 13, it is a privilege to be hosting one and bringing such a crucial conversation to the front burner, as it relates to SDGs 3, 5, and 8,” Esther Ijewere said.

Jeroo Billimoria, Catalyst 2030 spokesperson and one of the movement’s co-founders said the event provided a crucial platform for the social innovation community and world leaders to brainstorm and collaborate to explore solutions to these challenges.

“Time is simply not on our side and people are suffering unnecessarily as the UN’s 2030 deadline to meet the SDGs looms.

“We need to make the most of every opportunity to work together towards making our collective dream of a better world for all people a reality,” Bilimoria said.

“We are excited that Catalysing Change Week 2022 will again bring together a diverse group of experts, social innovators, entrepreneurs and leaders from the private sector and government.

“In a spirit of true collaboration we will listen deeply to understand the challenges and collaborate as never before to change the world for the better.

“Some of the problems that will be tackled include poverty, disease, food security and the pervasive global lack of access to basic services like health and education. Participants will tap into the collective wisdom around systems change while forging partnerships across countries, regions and sectors,” Billimoria said.

We invite the media and general public to join this panel session aimed at highlighting the role of the press and policy makers.