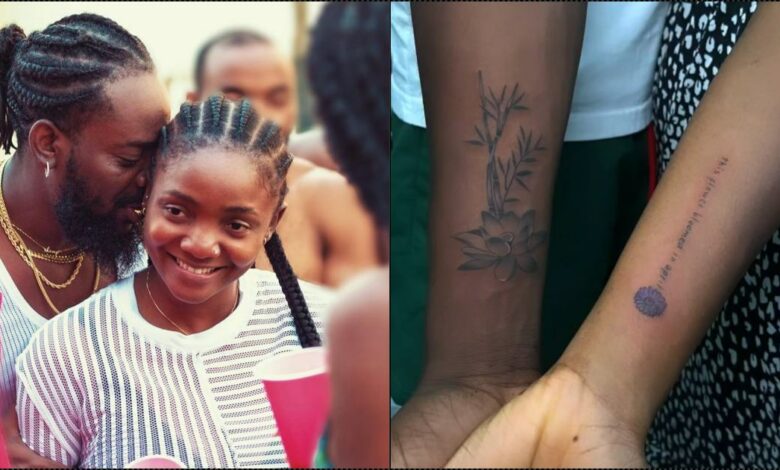 Adekunle Gold, aka AG Baby, and Simi Kosoko, Nigeria’s famous celebrity couple, rekindled their love on their fourth wedding anniversary on Saturday by getting adorable ink tattoos on their hands.

The couple, who married in a private ceremony on January 9, 2019, sparked outrage on social media recently after Simi’s response to a fan who hugged her husband tightly.

Adekunle Gold took to Instagram to share a video of their new tattoos as a declaration of love for one another.

AG Baby’s tattoo on his arm depicted a fully bloomed flower, whereas Simi’s tattoo depicted a young flower with the caption “this flower bloomed in April.”

The anniversary atmosphere was perfectly set by Styl Plus’ Four Year song, which played in the background of the video.

ER reports that the couple secretly dated for five years.

Adekunle and Simi welcomed their first child, daughter Deja, in May 2020.

The Afrobeats singers are one of the genre’s most-loved couples with over 16m Instagram followers between them, but they still value their privacy.

Recall that the couple celebrated their third marriage anniversary last year by taking to their respective Instagram pages to share lovely photos as they appreciated God for their marriage and expressed their undying love for each other.

The “Duduke” singer, while hailing her hubby, noted she looks forward to spending his money and massaging his body forever.

She wrote: “3 years and you’re still the one I love oooh the one that I belong too still the one I kiss goodnight. I love you, my boy. I thank you for this journey. God really working overtime with us.

AG baby confessed marrying Simi is by far the best decision he’s ever made.

He wrote: “I thank God for the best 3 years of our lives. Doing this life journey with you is by far the best decision I have ever made. Thank you baby for changing my life forever. I love you Magic.”

The music stars got married in January 2019 in one of the most private celebrity weddings attended by close friends and family members of the couple.

‘You will always be behind me’ – Mercy Eke blasts CeeC, others