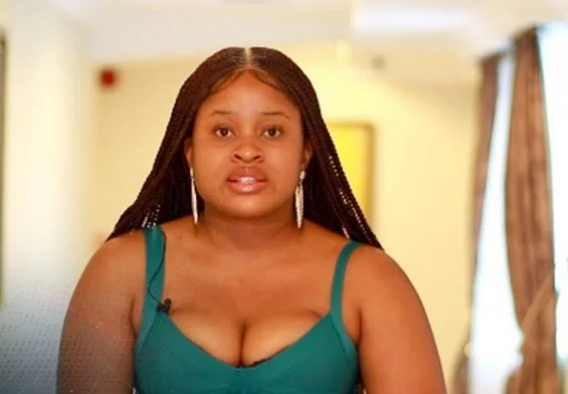 Amaka, the former Big Brother Nigeria (BBNaija) ‘Level Up’ housemate, has said she wasn’t expecting an instant eviction from the show.

Entertainment Reporter recalls that Amaka was evicted from the BBNaija house in a surprising nomination twist on Monday.

In a post-show interview, Amaka said she was expecting to be nominated for eviction but did not see the eviction coming “instantly”.

“I have just been nominated from the BBNaija season seven house, I never expected it. I know I was going to be up this week but I was not expecting an instant eviction,” she said.

Amaka also opened up about her relationship with Giddyfia.

She said she does not see the relationship working out after the show because she feels Giddyfia is “unreal”.

“Regarding my relationship with Giddyfia, I don’t think he is going to have any chance outside the house because I don’t resonate with unreal people,” she said.

“I never saw him as a real one so I don’t want to associate myself with that.”

BBNaija: Unbelievable! Daniella, Dotun ‘make out’ under the duvet — weeks after Khalid’s eviction

Basketmouth hits entertainers for not showing up after payment