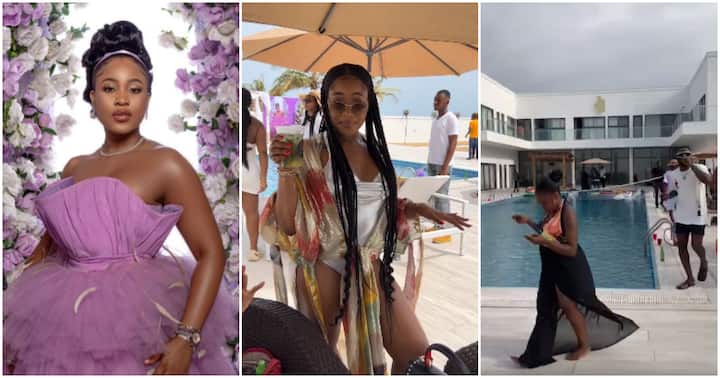 Fans of reality TV star, Erica Nlewedim will not forget Sunday, March 13 in a hurry as the actress celebrated her birthday.

The reality star kicked off the celebration of her birthday by flooding her Instagram page with beautiful pictures specially taken to mark the occasion.

In a caption that accompanied one of the posts, the BBNaija star wrote: “Happy birthday to me I pray this new year is the happiest and most peaceful and productive with very minimal stress in my life so far! In Jesus name amen.”

The celebrant threw a star-studded beach house party that saw fellow BBNaija reality stars in attendance as well as other popular faces in the entertainment industry. Maria, Liquorose, Dianne, Angel among others showed up to celebrate with one of their own.

The Entertainment Reporter recalls that Erica recently warned fans not to send her gifts through her mother.

In a series of tweets on her verified Twitter page on Thursday, the actress said that it was “weird” that some fans were talking to her mother and using gifts as an excuse to get information.

According to her, gifts which used to be sent to her Personal Assistant were now being sent to her mother.

Erica noted that her fans, whom she called Elites, were not the ones carrying out such an act, but a “frenemy fan base.”

“I think it’s very weird that some fans have decided to start talking to my mother and using gifts as an excuse to get information.

“Gifts used to be sent to my PA. All of a sudden, my mum is the one you want to send to. Why??? And it’s not elites, it’s the frenemy fan base. Stop it! Kiddrica fan base, to be precise.”

There are cliques in Nollywood-Jemima Osunde