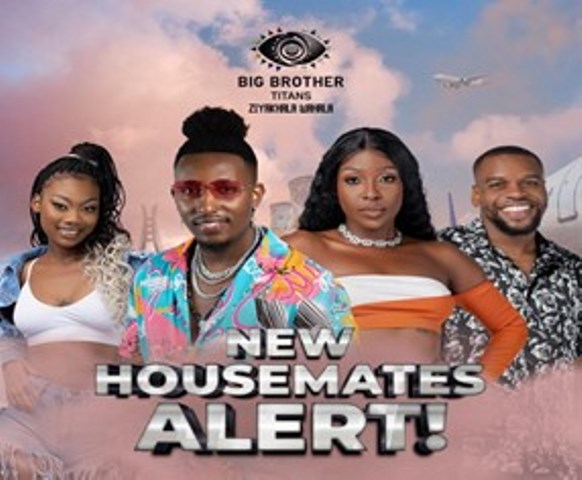 Big Brother Titans has introduced new twists to the show, as it unveiled four new housemates during last night’s party.

At exactly 7.24 pm, on Thursday, while the BBTitans housemates were showing off their swimsuits, dancing, drinking, and generally having a great time at the pool party, the doorbell rang, and four individuals dressed in similar masked outfits walked into the house.

The new housemates are: 24-year-old Miracle from Anambra state, Nigeria, works in his family pharmaceutical company. He is athletic, good-looking, witty, impulsive, talkative, and quite pessimistic at times. According to him, he is a tough guy with a softcore, especially to those who matter to him. He loves attention and having a good time. Theo is a 29-year-old music artiste and is originally from Waldrift, South Africa. He is of average height and equally good-looking. He loves creating art pieces, making music, and designing his own clothes. Theo describes himself as a “pink panther”, an African tribal guru. He is single and ready for all kinds of “ships”. He also describes himself as one with super high energy, is not afraid to express himself, is a risk-taker, is a good listener, and strongly believes it’s his time to shine. Originally from Akwa Ibom State, Nigeria, Sandra is 27 years old ex-beauty queen, model, host, and entrepreneur. She has a beautiful body and loves to show it off. She has no qualms about nudity and is confident and comfortable in her own skin. Sandra describes herself as a confident lady with a boss-b*tch attitude. She doesn’t trust easily and hides her emotions well. Blue is a 22-year-old professional dancer and DJ born in Limpopo, South Africa. She is dark, with a beautiful body and lots of sex appeal. She describes herself as bubbly, loud, naughty, wild, and a “ngwana wa strata…” (meaning ‘Child of the strata’) with daddy issues. She is emotional, can be a crybaby, and feels she has a lot to prove.

With the addition of the new housemates, more drama, romance, ships, alliances, friendship, frenemies and so much more are expected at the house.

“I shot Zazoo for free, without mentioning a word” TG Omori hits back at Portable