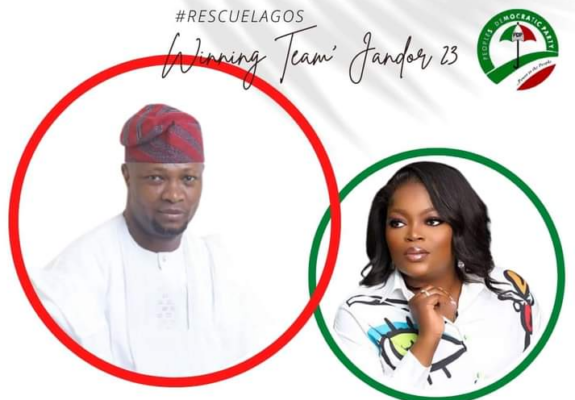 Adediran told the News Agency of Nigeria (NAN) that Lagos had enough resources to establish an airline.

He said the establishment of an airline would boost social and economic activities in Nigeria’s commercial nerve centre.

“We are going to have Lagos4Lagos Air.

“How can Akwa Ibom that is not making money as much as we are, have an airline and is managing it well, and we don’t have?

“We will make Lagos money to work for all,” Adediran said.

Jandor appealed to Lagos residents to vote for PDP in the 2023 general elections to enable the desire to materialise.

“The APC has tried its best for Lagos but its best is not enough for us,” he said.

Adediran said that the state had many problems facing it which required political will to tackle.

According to him, the state has not been able to find lasting solutions to gridlock, flooding and bad roads.

Adediran said that if elected, his administration would construct flyovers at all intersections and reconstruct roads to eliminate heavy traffic.

“What brings bottlenecks are potholes and intersections.

“When you have too many vehicular movements intersecting at the same time, it gives gridlock.

“We have activities of transport unions also causing gridlock.

“The first solution is to have a strong will to put an end to the menace of the transport unions and send them back to their garages and motor parks.

“We will declare a state of emergency on fixing all the inner roads that serve as bypasses and alternative routes, to take traffic off the major roads,” he said.