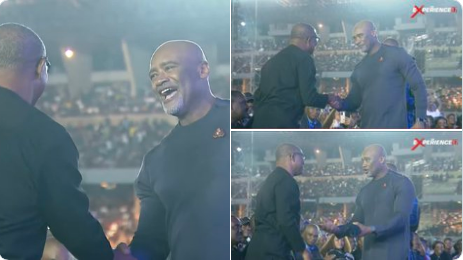 Presidential candidate of the Labour Party Peter Obi on Friday night attended the popular music concert The Experience in Lagos.

The concert was held at the Tafawa Balewa Square (TBS). The annual programme brings together thousands of people in one location for worship.

There were wild cheers from the crowd as soon as Obi was introduced. In pictures posted to social media, the show’s host and senior pastor of House on the Rock Church Paul Adefarasin can be seen chatting with the presidential candidate.

Also present at the event was Pastor Ituah Ighodalo of The Trinity House, Lagos.

Since becoming the presidential flag bearer of the Labour Party, Obi has attended several religious programmes where large crowds are gathered.

In August, he was at the 70th annual convention of The Redeemed Christian Church of God (RCCG) held at the Redemption Camp on Lagos-Ibadan Expressway.