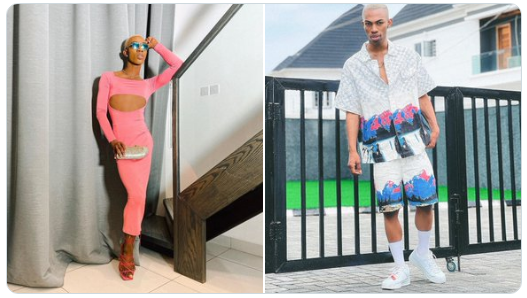 The 23-year-old who has been posting pictures of himself on social media in a man’s outfit also dubbed himself the “prince of Africa.”

Days after the sex tape went viral, the crossdresser switched, and he has since been promoting masculine clothing for a specific clothing company.

Reactions to the new look have appeared on social media.

Now that I've granted ur biggest wishes of u all wanting me to become a man….. how do yall feel?? pic.twitter.com/63kQoOe9bG

If you don't, you wouldn't be under his comment section tho.🥴🥴

We want princess of Africa back 🙄🙄

You make it sounds as tho you did us a favor Lol, look at you bro, you look awesome brova, this is who you are but probably refused to embrace it….you growing a beard? It'll look really awesome

Don’t marry a heartless person, Skales advises as he unfollows wife on Instagram