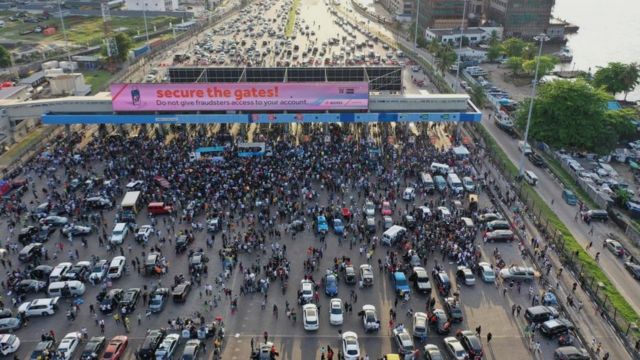 Mr. Macaroni, a comedian and activist, has announced a nonviolent walk to mark the second anniversary of the #EndSARS protest.

The peaceful walk will honor those lost in the protest on October 20 at the Lekki toll gate in Lagos, according to the 29-year-old who announced it in a tweet on Wednesday.

He wrote: “Peaceful Walk tomorrow in honor of all #EndSars and Police Brutality Victims!!! We no go fit ever forget!”

Earlier in October, chairman of the Lagos State Parks and Garages Management Committee, Musiliu Akinsanya aka MC Oluomo said that claims that #EndSARS protesters were killed at toll gate in 2020 are lies.

MC Oluomo said this during the solidarity rally he organised for the presidential candidate of the All Progressives Congress Bola Tinubu and Lagos State Governor Babajide Sanwo-Olu.

“They said people died during #EndSARS. Where are the corpses? Where were they buried? That is number one. Number two: Don’t those presumed dead people have families in Nigeria? Number three: Has Nigeria gone to bribe the parents of the presumably dead people such that we cannot see anyone saying on social media that his or her sibling has been missing since joining the protest at the toll gate? Is Bola Ahmed Tinubu the chief of army staff or president that he would order soldiers to shoot protesters at the toll gate? These are the lies they feed you with. They are all lies. Atiku and Obi were responsible for the lies,” he said.

Related Topics:Mr macaroni
Up Next