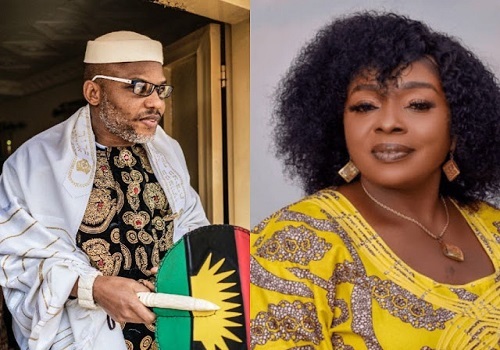 Rita Edochie, an actress, has expressed her happiness over the release of Nnamdi Kanu, the imprisoned IPOB leader, by an appeals court on Thursday.

On Friday morning, Rita, an ardent supporter of Kanu, shared the good news with her Instagram followers while also posting a picture of the IPOB leader and herself.

She wrote: “ONE WITH CHUKWU OKIKE ABIAMA IS MAJORITY. NO MATTER WHAT YOU FEEL OR THINK THE TRUTH IS OUT AND HE IS FREE. DAALU CHUKWU OKIKE ABIAMA THAT AT LAST MAZI NNAMDI OKWU KANU IS FREE, DISCHARGED AND ACQUITTED. I AM HAPPY AND EXCITED NOW. NNOOOOOO NNAM. ALSO A BIG THANKS TO ALL THE PEOPLE THAT MADE IT POSSIBLE LIKE MAZI IFEANYI EJIOFOR AND OTHERS.”

A three-man panel of the court said the Federal High Court lacks the jurisdiction to try him in view of his abduction and extraordinary rendition to Nigeria in flagrant violation of the OAU convention and protocol on extradition.

The Federal Government had filed a 15-count charge against Kanu before the Federal High Court in Abuja bordering on treasonable felony and terrorism.

But the appellate court ruled that the 15-count charge preferred against Kanu did not disclose the place, date, time and nature of the alleged offences before being unlawfully extradited to Nigeria in clear violation of international treaties.

The court further held that the Federal Government failed to disclose where Kanu was arrested despite the grave allegations against him.

The court further held that the trial judge was in grave error to have breached the right to fair hearing of Kanu.

It further said the African Charter on Human and People’s rights are part of the laws of Nigeria and courts must abide by the laws without pandering to the aim of the Executive.

“The court will never shy away from calling the Executive to order when it tilts towards Executive recklessness,” the appellate court held.